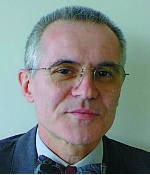 In recognition of his significant achievements in the field of 3D visualization and modeling as applied to the oil and gas industry.

Jean-Laurent Mallet is professor at the Institut Nacional Polytechnique de Lorraine in Nancy, France. His research career started in 1968 following training as a geologist. He diversified his interests into applied mathematics, finishing his research education with a PhD in computer sciences at the Institut Nacional Polytechnique de Lorraine. In his early years he worked with the CNRS in the field of numerical data analysis and automated mapping. In 1981 he was nominated professor at INPL, from which he directs teaching and research of computer science applications related to geology. In 1989 he launched the gOcad project, which today is supported by twenty-five industrial partners and thirty-two universities and public research institutions. Built from small beginnings, by himself and a CNRS research engineer, his laboratory now comprises 20 research scientists and 10 graduate students.

Dr. Mallet has been the recipient of several awards and was the recipient of the 1994 SPE Best Paper Award. He has authored or co-authored nearly 70 papers and 4 books, and holds 2 European and 2 US patents.