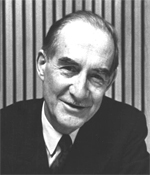 "For contributing profound and revolutionary concepts to borehole logging techniques which have resulted in the economic discovery and exploitation of vast hydrocarbon reserves."

Henri Georges Doll was chairman of the board of Schlumberger Well Services for 26 years (1941-1967). He retired in 1967 and now heads his own company, Doll Research, Inc., New York City.

Born in Paris, Mr. Doll graduated from Ecole Polytechnique and later studied geology and mining engineering at the Mining School. He joined Schlumberger in 1926 and the following year, developed and built the first equipment to survey a drill hole and ran the first log. In 1930, Mr. Doll became the company's technical manager.

Mr. Doll came to the United States (Houston) in 1940 to organize an engineering department for Schlumberger. During the war, he directed the development of several types of mine detectors, for land and underwater operation, and later received a certificate of appreciation from the War Department for his efforts.

When the war ended, Mr. Doll began expanding the company's research and engineering facilities. As manager of techniques and director of research, he contributed most of the basic principles and specifications for logging. He has authored or co-authored 27 papers on logging and interpretation techniques.

In 1966, Mr. Doll received the Gold Medal Award for Achievement from the Society of Professional Well Log Analysts.