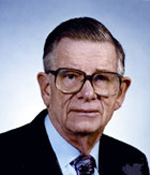 Donald W. Peaceman, retired Senior Research Advisor for Exxon Production Research Co. in Houston, holds a B.S. from the City College of New York and a D.Sc. from the Massachusetts Institute of Technology, both in Chemical Engineering. He began his career in 1951 with Humble Oil & Refining Co. in production research, numerical mathematics, and application of computers to reservoir simulation, When the company reorganized as Exxon Production Research Co, in 1964, he continued as research advisor in reservoir simulation and seismic data processing. Dr. Peaceman has written more than 20 articles, one book and holds a U.S. patent. Since his retirement from Exxon, Dr. Peaceman has been a consultant for J. S Nolan & Associates (now part of Western Atlas International) and Adjunct Professor, Mathematical Sciences, at Rice University.