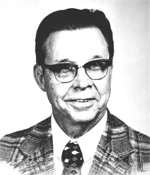 For contributions in the fields of fluid mechanics formation evaluation, geochemistry, hydrocarbon recovery and reservoir engineering and for distinguished service to industry and professional groups.

Claude R. Hocott graduated with his bachelor's degree in 1933, Professor E. P. Schoch, a chemistry professor of great vision who founded the Department of Chemical Engineering, persuaded him to enroll in graduate school. Hocott stayed to research the Schoch process, earning a PhD in chemical engineering in 1937. Shortly before Hocott obtained his PhD, Humble Oil Company, on the recommendation of W. K. Lewis, a professor at MIT, had formed a research laboratory entirely devoted to researching methods for finding and producing oil and gas. Hocott was hired as a research engineer to work in this new laboratory. Since this laboratory was the first of its kind in the world, there was no shortage of interesting and important problems to be researched. Hocott's early publications related to issues of crucial importance for reservoir engineering. Researchers at the Humble Laboratory did pioneering work that was to become the basis for modern exploration and production technology. The success of the production research laboratory is perhaps best measured by noting that, by 1948, every major oil company in America, and many outside the U.S., instituted laboratories similar to Humble's.

Hocott received considerable recognition for his efforts on behalf of the oil industry, his profession, and higher education. He was named a distinguished graduate of The University of Texas College of Engineering in 1971 and elected to the National Academy of Engineering in 1974. He was named an honorary member of the American Institute of Mining, Metallurgical and Petroleum Engineers in 1975.