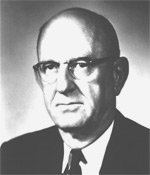 For his outstanding contributions to engineering in the development and production of petroleum. For his studies of reservoir behavior and his many published papers advancing the art of reservoir control. For his work in appreciating the need for an instrument capable of determining reservoir pressures, in developing A gage for recording bottom-hole pressures, and in teaching its use. For his long and effective service to the Institute in the Petroleum Division.

As the petroleum industry is one of the youngest and most virile of all those connected with the exploitation of the world's natural resources it is fitting that the Lucas Medal should usually be awarded to men who are young, or at the most, in the prime of their life. This is the case with Charles Van Ormer Millikan, the 1944 medalist. He was born in Oklahoma and graduated from Oklahoma’s Agricultural and Mechanical College just in time to enlist in the Navy for World War I.

After the war he worked for a few years for several consulting firms in evaluating oil and gas properties in the Appalachian area, and in 1922, he joined the staff of Amerada Petroleum Corporation as geological and production engineer. He is now this company’s chief engineer.

A student of oil and gas reservoirs, Mr. Millikan has pioneered in valuation of natural gas properties, in gas-lift principles, and in gas-oil ratios. He was largely responsible for giving the oil industry a method of surveying well deviation and he ran the first instrument for this purpose in 1928. His efforts in the development of a subsurface recording temperature and pressure gage, many of which have been the subject of technical papers presented to the Institute’s Petroleum Division, have brought him world wide recognition.

Mr. Millikan joined the Institute in 1920 and has been active in the Petroleum Division since its organization twenty years ago, serving on many committees and as chairman in 1930. His accomplishments are well summarized in the citation that accompanies his medal.