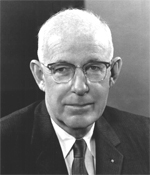 "For over fifty years of continuously dedicated service with contribution of many new concepts, researched, developed and carried to beneficial usage in the production of oil."

C. J. Coberly is currently honorary chairman of the board and full-time consultant to Kobe, Inc. He established the firm in 1923.

Mr. Coberly holds a mechanical engineering degree which he received from Stanford University in 1915. He applied for his first oil well patent in 1914 while still an undergraduate. He now holds more than 220 patents.

The 1969 Lucas medalist founded Kobe, Inc. in 1923 as a manufacturer of torch-cut, non-plugging casing for formation sand control in oil well completions. In the late 1920's, after directing his attention to problems of oil well pumping, Coberly developed the hydraulic oil well pumping systems which today constitute Kobe's major interest.

The Anthony F. Lucas Gold Medal is on of the petroleum industry's most coveted awards and is conferred in recognition of "distinguished achievements in improving the techniques and practices of finding and producing petroleum." It was established in 1936.