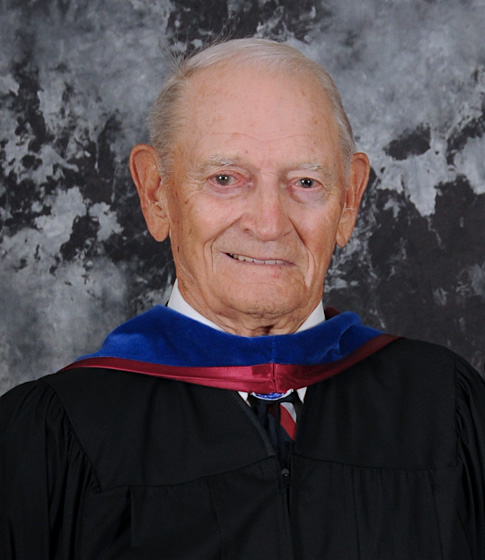 Dr. Raymond Lloyd Smith, a remarkable man from humble beginnings, was born on January 25, 1917, in Vanceboro, Maine, growing up with his 3 siblings in that area. In 1931, at age 14, Smith worked under-cutting trees for $.75 a day. At age 15, he decided to work on his own making as much as $1 per day sawing cordwood for the pulp industry. The following year, when he was 16, he went on his first river drive on the St. Croix River between Maine and New Brunswick. Smith also worked in a mental institution for three years and during the days of the depression, he became a hobo, riding the rails in Maine.

Aimless and poor at age 22, Smith headed to Alaska in search of gold but found an education instead. Smith never expected to attend college, but that changed due to a chance meeting with Charles Bunnell, President of the University of Alaska Fairbanks. Bunnell declared Smith a resident of Juneau, and he attended school tuition-free, surviving the harsh Alaskan winter by snaring hares, picking berries, and hunting grouse, duck, and caribou. Later, speaking of President Bunnell, Smith stated, “He changed my life in the couple of hours I first met him. He remains a hero in my book of memories. I went from a broken upstart to a university president with his boost.”

After graduating from the University of Alaska in 1943 with a degree in mining engineering and a minor in metallurgy, Smith served in the Army, Seventh Regiment, during World War II. From 1943 to 1946 he served with the Ordnance Corps of the United States Army. During his service days, he and Beatrice Bennet married in Maryland and later had two sons. After the war, Smith returned to Alaska where he taught mining engineering and math at the University of Alaska Fairbanks School of Mines.

After three years of teaching in Alaska, Smith left in 1949 to pursue a doctorate in metallurgical and materials engineering from the University of Pennsylvania, following legendary professor, Robert Brick, when he left Cambridge for Philadelphia. After receiving an MSE in 1951 and Ph.D. MetE in 1953 from the University of Pennsylvania, Smith joined the staff of the Franklin Institute of Research Laboratory. There he served as head of Solid State Physics rising to the position of technical director of the laboratory and consulting with the Atomic Energy Commission. His research led to the development of some of the purest iron in the world.

In 1959, Dr. Smith joined the faculty of the Michigan College of Mining and Technology (now Michigan Technological University) as a professor and head of the Department of Metallurgical Engineering. Under his leadership as chairman, the department quickly rose to national prominence. After six years at Michigan Tech, he became the University's sixth president in 1965, a position he would hold for the next fourteen years. Under Smith, the University experienced unprecedented growth in terms of enrollment.

During his tenure, enrollment grew from 3,400 to more than 7,600. Faculty numbers nearly doubled during that period as well, increasing to nearly 300.

The university's physical expansion was equaled by growth in curricula. New programs were created in bioengineering, computer science, forest engineering, industrial engineering, science teacher education, transportation, water resources, and engineering science. The university was organized into the College of Engineering, College of Sciences and Arts, School of Business and Engineering Administration, School of Forestry and Wood Products, and School of Technology. During Smith's tenure, research dollars were increased 250 percent, and nearly 66 percent of faculty had PhDs, compared to 27 percent in 1964.

Another major contribution was Smith’s creation of the culture of philanthropy. Working with Martin Caserio, Smith established a foundation to benefit the University. Together they increased donations from $30,000 a year into the millions. Smith cited Caserio as his reason for going to Michigan Tech.

Dr. Raymond L. Smith retired in 1979 moving to Green Valley Arizona but maintained a relationship with the university. He served as an advisor to Michigan Tech presidents Dale Stein, Curt Tompkins, and Glenn Mroz, and also remained active in promotion and fundraising for the university. In 2010, Smith returned to Michigan Tech to address the graduates and was awarded the university’s highest honor, the Melvin Calvin Medal. The award was named for its first recipient and recognizes individuals who have had an affiliation with the university and who have exhibited distinguished professional and personal accomplishments.

Smith, a fellow of both the American Society for Metals (ASM) and the Minerals, Metals, & Materials Society (TMS), is a recognized authority on minerals and metals. As such, he served on several national engineering boards and commissions. Contributions include membership on the National Materials Advisory Board, the State of Michigan Advisory Panel for Hazardous and Toxic Wastes, U.S. Special Commission on Energy, Engineers' Council for Professional Development, Board of Trustees to the American Academy of Transportation, Council on Postsecondary Education, Michigan State Board of Education, and the Review Committee of Metallurgy Division at Argonne National Laboratory. Dr. Smith was inducted into the Academy of Metallurgical and Materials Engineers as part of the inaugural 1996 class. He served as the president of the American Society for Metals in 1980.

At age 93 he was still working with the Hazardous Abandoned Mine Finder group pinpointing the locations of hazardous mines in a 10,000 square mile area of south-central Arizona. This group of only a handful of men is a volunteer group of the U.S. Forest Service. They locate the mines, record data on the environment and wildlife, and erect safety signs.