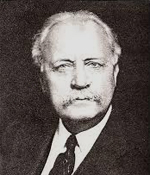 Karl Emrich Eilers was born November 20th, 1865, in Marietta, Ohio. It appears Karl grew up a product of both Brooklyn, New York, and the Eastern Front of the Rocky Mountain Range, specifically Pueblo and Denver. Growing up, whether aware of it or not, Anton was becoming an important player and entrepreneur within the smelting and refining industry. Between the ages of 10 and 15, Anton likely spent a good deal of time away from the family, working in the Rockies, moving to Salt Lake, then to Leadville, before setting up the Colorado smelter in the early 1880s. So, it’s plausible that Karl may have spent some time in Salt Lake in during the time Anton was managing the Germania Smelter (which is now downtown Murray, Utah). At some point along this journey, Karl jumped on the path of a mining engineer and, after high school, entered Columbia University in New York. Upon graduation, Karl entered graduate school, completing a joint thesis with Edward Ferris Weekes called, The Blast and Water Systems in a Blast Furnace and Steel Plant.: Thesis, published May 1, 1889. Following his graduation from Columbia, Karl (along with his younger sister Anna) headed East to the University of Berlin for two years of post graduate work. Following that he spent eight months at l’Ecole des mines in Paris, studying the mining conditions in France and Spain. He would return to the U.S. In December of 1892. Upon his return to the United States, Karl went to work for his Anton’s company, the Colorado Smelting and Refining Company. He worked as an assayer, examining ore for its mineral components. He soon left that company, joining the St. Louis Smelting and Refining Company for a short time, and then worked for the United Smelting and Refining Company. In 1893, he returned to the Colorado Smelting and Refining Company, becoming the superintendant of the company for the next six years. In 1899, when Anton Eilers merged his company (Colorado Smelting) into the American Smelting and Refining Company, Karl became the company’s Colorado properties manager. By 1903, Karl was promoted to head of all of the American Smelters properties in the United States. Much of this position included building, monitoring, and modernizing smelting plants. Among the plants he built were the Garfield plant, at Garfield, Utah, the largest of its kind in the world when they completed it in 1906 ; the Murray plant; the Durango plant; and the smelter in Hayden, Arizona. Among the plants he modernized was his father’s former plant, the Germania smelter, in Salt Lake City, Utah. In 1906, Karl joined his father on the board of directors and on the executive committee of American Smelting; positions he held until 1920. By 1916, Karl was elected Vice-President of the company, with Simon Guggenheim as President. In 1920, Simon and Karl had a falling out. For the next few years, Karl and the Guggenheims battled for control of ASARCO, very publicly in the New York Times and other periodicals. While Karl would never gain full control of ASARCO, the Guggenhiems would loose control, due to a force increase in the number of board of directors. Around 1925, Karl became the head of Lenox Hill Hospital, almost immediately launching an effort to dramatically increasing the size of the hospital. Over the next 16 years, Karl played an important role in guiding and raising money for the hospital. In 1934, he launched Associate Hospital Service of New York, a non-profit community organization that proposed to put hospital care on the family budget for annual charge of 3 cents a day. Essentially, this was an insurance plan. Apparently, the idea was based on a successfully functioning, similar plan among miners and smelters during his years in Pueblo Colorado The plan was the most successful hospital program in the United States, growing to more than 650,000 men, women and children in the New York Metropolitan area. It was estimated that subscribers saved more than $3,715,000 in hospital bills. Karl Emrich Eilers died on August 18, 1941 at his home on Sea Cliff, Long Island, NY.