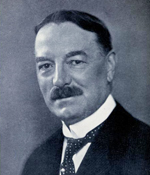 Horace Vaughn Winchell was the oldest son of Newton Horace and Charlotte Sophia Imus Winchell. He studied at the University of Minnesota and then at the University of Michigan, from which be graduated in 1889. Apparently he was greatly influenced by his uncle Alexander Winchell, under whom he studied, as well as by his father to follow the natural sciences. Winchell’s first geological work was for the Minnesota State Geological Survey; his father, the state geologist, assigned him to study the Mesabi Range, where promising sources of iron ore had just been discovered. Winchell next worked for the Minnesota Mining Company, until the panic of 1893 terminated exploration. He and F. F. Sharpless then formed a partnership as consulting geologists; however, depression in the mining industry and work in the West led to its early dissolution. In 1898 he became geologist for Anaconda Copper Mining Company and, in 1906, geologist for the Northern Pacific Railroad. In 1908 Winchell broadened his consulting practice and established an independent office in Minneapolis. His assignments took him to Alaska, Mexico, South America, Europe, and Russia, where he witnessed the Kerensky revolutionin February 1917. He retired to Los Angeles in 1921. Winchell’s contributions to science differ greatly from those of his father and his uncle even though his early career was devoted to the observational and theoretical aspects of geology, in close association with his father. Field studies on the driftcovered Mesabi Range outlined the importance of that area as a source of iron ore and led to an acceptable theory of the origin of the ores. A Bulletin of the Minnesota Geological Survey on the iron ores of the state, published with his father (1891), and another report published in 1893 especially on the Mesabi Range, influenced the development of the most productive iron ore deposits in America. The iron-bearing strata originated, according to Winchell and his father, as a chemical precipitate from Precambrian ocean waters; however, the algal and bacterial structures found later suggest some involvement of organic life forms. Winchell favored the view that the soft ore bodies resulted from the alteration of the strata by surface waters (secondary enrichment), and his early experience on the iron ranges influenced his thinking with regard to other ore deposits around the world. In 1898 Winchell turned to the practical applications of the then-evolving science of geology to mining and engineering problems, and eventually to mining law. A geological staff was organized at the Anaconda Copper Mining Company, and his success in advising the engineers on the development of the Butte, Montana, mine no doubt encouraged other companies to set up similar departments, Winchell’s policies of geological investigation and continuity of geological mapping in connection with mining operations proved highly profitable. In 1903 he published the conclusion that the upper levels of the Butte copper ore were the result of secondary enrichment, basing that view on geological field studies and laboratory experiments carried out with the assistance of C. F. Tolman, Jr. The concept of secondary enrichment had already been well established, but Winchell’s role in its development was recognized. Turning to private consulting practice in 1908. Winchell became more involved in the legal problems accompanying mining. He was particularly interested in the statutes attending extralateral rights, those governing mining claims, and ownership of mineral properties in the public domain. His concern for the public good and appreciation of the need for development of new resources was great. One of his friends and biographers records his occasional bitterness toward the hostile and critical attitude of some of his fellow scientists, who held such service to humanity in low regard in comparison with the contributions of pure science. Winchell helped found, and for about five years served as editor of, Economic Geology, which was in effect a continuation of the American Geologist (the latter established primarily through the efforts of his father in 1888). He also was one of three American associate editors of Zeitschrift für praktische Geologie from 1896 until the United States entered World War I.