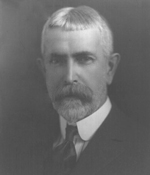 Edwin Ludlow was born in Oakdale, Long Island, N. Y. March 12, 1858, a son of William Handy and Louise (Nicoll) Ludlow, attended Flushing, (L.I.) Institute 1868-75, and Columbia School of Mines (N.Y.) where he graduated with the degree of Engineer of Mines with the Class of 1879. After graduation his first employment was as assistant engineer in river and harbor work on the Delaware River near Philadelphia. In 1881 he went to Mexico as one of the engineers on the Mexican Central Railroad, then building from Laredo, Texas to Mexico City, the road being in financial difficulties he returned to the United states, and shortly thereafter was made Superintendent of the Union Coal Co’s. collieries located in the Western Middle Anthracite field, between Shamokin and Mt. Carmel. Ludlow and Arthur H. Storrs, then Superintendent of the Neilson Shaft Colliery, in Shamokin, were known throughout that section as the baby Superintendents, both under twenty-five years of age, the appointments of such young men were at that time unique and set a record for youthful assumption of responsibility in the region. One of Ludlow's exploits, which his old associates loved to tell was the rescue of a team of mules caught by a sudden inflow of water, while the old bosses were bemoaning the loss of the mules the young Superintendent stripped and swam through the flooded gangway and brought them out. In 1885, when Irving A. Stearns was made Manager of the anthracite properties controlled by the Pennsylvania Railroad Co. he made Ludlow superintendent of the Mineral Railroad & Mining Co's. properties, the Cameron and Luke Fidler collieries at Shamokin. In 1889 he was offered charge of the properties of the Choctaw, Oklahoma and Gulf R. R. Co., virgin coal lands at Hartshorne, Oklahoma, the opportunity to open and develop this great property, a field 80 miles long, appealed to the brilliant young engineer, and he left the east to make his home and fame in twenty-two years of arduous and successful work in the southwest, bringing to that virgin country engineering knowledge and experience which had a commanding influence in its development. Leaving Oklahoma in 1889, he became General Manager of the Mexican Coal & Coke Company, Las Esperangas, Mexico, which he operated with notable success until he left the country in 1911. In Oklahoma Ludlow met, and on November 22, 1893, married Miss Anna Wright, whose delightful personality and openhanded hospitality which through the years has added so much to its affairs, was introduced to the Institute at the Mexican Meeting 1901, during which the entire party was entertained at Las Esperanzas. At this time Ludlow presented an able paper on the coal fields of Las Esperanzas, Coahuila., Mexico, describing in detail the geology of the field and the mining methods and plant of the Company. The opportunity to come back to the east as Vice-President and General Manager of the New River Collieries Co. at Eocles, West Virginia,tempted him in 1911 to leave Mexico and return to the east. A year later Mr. W. A. Lathrop, then President of the Lehigh Coal & Navigation Company induced Ludlow to return to his first mining work in the Anthracite region, as Vice-President and General Manager of that Company, unquestionably the oldest incorporated Coal Co. in the United states. From 1912 to 1919 he brought his great abilities and ripe experience to the upbuilding of this old Company, its tonnage increased from 3,674,000 in 1912, to 4,763,000 in 1919. That this increase was hot at the expense of careful work is shown by the reduction in the fatal accidents rate from one to each 160,000 tons produced in 1912, to one to 235,000 tons in 1918. Wishing to retire from the burden of great operations earlier Ludlow patriotically subordinated his wishes to the national need and remained in charge until after the War, when he entered consulting practice in New York, and up to the time of his death continued in that practice and in looking after mining interests in Oklahoma where he was heavily interested. Mr. Ludlow became a member of the Institute in 1893. Served as Director 1916 to 1919, Vice-President 1919 and 1920, First VicePresident 1920. and succeeded Mr. Hoover as President in 1921, which year he largely devoted to the service of the Institute. He was Vice-Chairman of the Anthracite Section from its inception until he left the region. Besides his Institute honors he was an honorary member of the Institute of Mining and Metallurgy of Great Britian, and a member of many American technical societies. As a Columbia graduate he was honored as Director and in 1919 and 1920 President of the Alumni Association of the Schools of Mines, Engineering and Chemistry, and served for years on the board of the- Columbia Alumni Federation. An engineer of high attainments, he was also an executive of the front rank, notable for both his organizing and his operating ability. A great believer in young men he encouraged his subordinates to record their work, and to his suggestion and assistance is due the valuable papers presented to the Institute during recent years from the district dominated by his Company. Always fond of his fellow man Ludlow belonged to many social organizations, the University, Century, Columbia University, and Downtown Clubs in New York, the Engineers' Country Club on Long Island, the Muskogee Oklahoma Country Club and the United states Seniors Golf Association. Edwin Ludlow came from an old New York family, only very recently they sold their Long Island homestead, the only prior conveyance of which was from the Indians to a direct Ludlow ancestor. Mr. Ludlow was the last of his name, his two older brothers, Admiral Ludlow, and General Ludlow, formerly Governor of Cuba and of the Philippines are both gone without male descendants. In the minute recording his death the Board of Directors of the Institute said:- "In his death the profession loses a courageous leader, strong in his convictions, honorable in his dealings; competent and trustworthy in his work, loyal in his friendships and eloquent in upholding its best traditions".