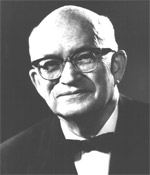 Charles S. Barrett, Professor Emeritus of the University of Chicago, is now at the University of Denver as a Senior Research Scientist at the Denver Research Institute and Adjunct Professor of Physics. He is co-chairman of the Denver X-ray Conferences and co-editor of their annual Advances in X-ray Analysis. After earning a B.S. from the University of South Dakota, and a Ph. D. from the University of Chicago in 1928, he joined the Metallurgy Department of the U.S. Naval Research Laboratory, working with R.F. Mehl in applying x-ray diffraction to metallurgical problems. Joining the Metallurgy Department of the Metals Research Laboratory of the Carnegie Institute of Technology in 1932, his teaching and research led to his publishing the classic work The Structure of Metals in 1943. From 1947 to 1971, Dr. Barrett was a research professor at the University of Chicago. His current research on stress analysis uses novel x-ray methods for measuring stresses in metals, as well as amorphous materials and fiberreinforced polymeric composites. A past chairman of the Institute of Metals Division of AIME, Dr. Barrett gave the Division's Annual Lecture in 1944. He was the recipient of the Institute of Metals Division Award in 1934 and 1944, of the Mathewson Gold Medal, and the Hume-Rothery Award of The Metallurgical Society of AIME. He is a Fellow of TMS-AIME and Honorary Member of the American Society for Metals which awarded him the ASM Gold Medal. He is a member of the National Academy of Sciences and an Honorary Member of the Japan Institute of Metals.