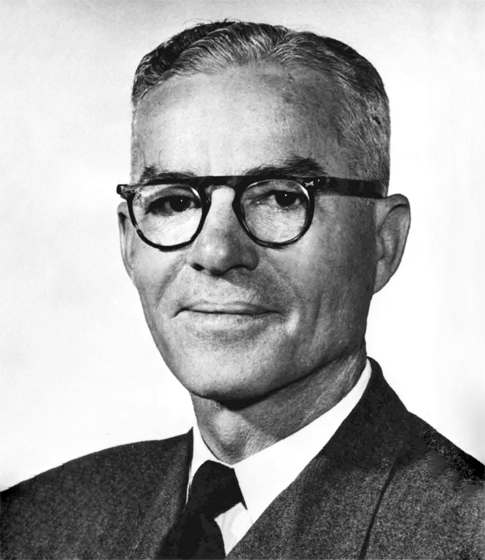 Ronald Russel McNaughton was born in Vancouver, Canada, in 1900, and received his primary education in the public schools there and in Victoria. He studied Arts at the University of British Columbia for one year when he concluded that engineering was his vocation. This decision caused him to go to McGill University where he was an Honor Graduate in 1923, with a B.Sc. in Metallurgical Engineering.

Immediately after graduation, he joined the Consolidated Mining and Smelting Co. of Canada, Limited, at Trail, B. C., Canada, starting as assayer. He served in the Smelting Department successively as Assistant Foreman, Development Engineer, Assistant Superintendent, and Metallurgist. As Chief Metallurgist, his responsibilities were extended to include all-metal production, and he was appointed Manager of the Metallurgical Division in 1946.

In the Smelting Department, Mr. McNaughton was in charge of research and development on a number of projects, including the slag fuming operation. When the slag fuming plant "was constructed in 1930, a number of innovations were adopted and these have now become standard in the industry.

Mr. McNaughton's current responsibilities include the reduction and refining of all-metal productions and involve the employment of some 1,800 people. The scope of his activities is doubly impressive when one considers that Cominco is one of the world's largest producers of lead, zinc, silver, and chemical fertilizers. Metal output includes cadmium, bismuth, gold, indium, antimonial lead, and tin.

His many metallurgical accomplishments and his active interest in the profession have brought Mr. McNaughton international distinction. He is a Professional Engineer of the Province of British Columbia and a member of the Mining and Metallurgical Society of America, and the Canadian Institute of Mining and Metallurgy. He has been a Member of AIME since 1945.

In addition to the 1,800 people under Mr. McNaughton's supervision at Trail, he will now head the 36,000 members of AIME, at least as far as their professional Society is concerned. He has held numerous offices in the Institute, having been Chairman of the Extractive Metallurgy Division in 1953, and Chairman of the Metals Branch in 1954. The Metallurgical Society of AIME, which was formerly the Metals Branch, nominated him for the presidency.

During 1960, as President-Elect, Mr. McNaughton was a Director of the Institute and served on its Executive Committee. During that year, he visited many Local Sections of AIME and thus became known to hundreds of members in advance of his taking the reins of the highest office AIME can offer.

The President and his wife, the former Dorothy Millew of Montreal, have two sons, Richard and Peter, both married, and one granddaughter.

Mr. McNaughton's genial personality, administrative ability, and experience as an executive of a large organization bode well for AIME which is fortunate indeed to welcome him as its President.