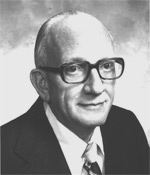 At the age of 16 he worked for Morgan Engineering Company at Alliance as a chemist. He was metallurgical assistant for National Tube Company at Lorain, Ohio, from 1933 to 1936 and from 1936 to 1938 was open hearth metallurgist for The Youngstown Sheet and Tube Company.

In 1938 Dr. Fetters left The Youngstown Sheet and Tube Company to spend one year as research assistant at Massachusetts Institute of Technology, one year as a national Open Hearth Fellow at M.I.T., then returned to The Youngstown Sheet and Tube Company as general metallurgist. While at M.I.T., he was chosen as an "Honorary Fellow" of The Metallurgical Society of AIME. He is a member of honor societies Tau Beta Pi and Sigma Xi.

From 1941 to 1943 he was assistant professor and a staff member of the Metals Research Laboratory at Carnegie Institute of Technology and was in charge of the Office of Scientific Research Development project on seamless gun tubes.

In 1948 he and J. L. Mauthe, former Chairman of the Board of The Youngstown Sheet and Tube Company, received The American Iron and Steel Institute Medal for their paper, The Mineralogy of Basic Open Hearth Slags.

One of his hobbies is Amateur Radio Operating Station WA8BVA. He is a member of American Radio Relay League. He is also interested in boating and navigation. He is an active member of U. S. Power Squadrons where he has taught various courses in seamanship and advanced piloting and is a member of U. S. Coast Guard Auxiliary where he has been training officer of 9th Division of U. S. Coast Guard 9th District and has lectured for various public information courses on boating safety.

With his wide and long experience in Institute affairs, Dr. Fetters promises to be an able and valued President of AIME during 1964.