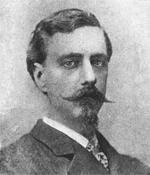 James Copper Bayles, journalist, editor, and engineer, was born on July 3rd, 1845, in New York City. He was the youngest child of James and Julia Halsey (Day) Bayles. He pursued a course of technical studies until 1862 when the outbreak of the Civil War interrupted his education. At that time, he enlisted in the Army and served as a 2nd Lieutenant of artillery in Co G, 16th New York Heavy Artillery Regiment. In 1864, he was compelled to resign his commission due to health issues caused by exposure and injuries and returned to New York. He then began to focus his attention on journalism and, in 1865, became the editor of the New York "Citizen" until 1867. In 1868, he was the editor of the New York "Commercial Bulletin" through 1869. On October 21st, 1869, he married Ianthe Green, daughter of Edward Green, a New York lumber merchant. James and Ianthe had two sons, Lewis C., and Howard G. Bayles, and a daughter, May Green Bayles. He continued his career in journalism by becoming editor of "The Iron Age" in 1870 and continued in this capacity for 28 years. He then established "The Metal Worker" in 1874, also becoming editor of that publication. Dr. Bayles dedicated much of his time and gave mindful attention to the specific topics of these journals. His chief contributions were on the subjects of electrometallurgy, microscopic analysis of metals, and sanitation and mechanical hygiene. He became a member of the editorial staff of the New York Times in 1899. During his lifetime, he filled various vital offices to include: President of the New York City Department of Health (1887-88) and of the New Jersey State Sanitary Association. He was the commissioner for planning and carrying out the work of constructing a new sewer system in New Jersey. Dr. Bayles was elected into membership of the American Institute of Mining Engineers (AIME) at the May 1878 meeting in Chattanooga and was also a charter member of the American Society of Mechanical Engineers. He served two terms as President of the Institute (AIME) in 1884 and 1885 and served as Vice-president for two years, beginning 1888 and again in 1894. He contributed papers on "Microscopic Analysis of Structural Steel" (presented at the August 1882 AIME meeting in Colorado), "Spirally-Welded Tubing" (presented at the February 1888 AIME meeting in Boston, MA), "Explosions from Unknown Causes" (presented at the September 1890 AIME meeting in New York), and other similar topics to the Transactions of AIME. He lectured extensively in New York and New Jersey, going before the Sibley School of Engineering at Cornell University in 1886. He authored many scientific works to include, "House Drainage and Water Service in Cities, Villages, etc., with Consideration of Causes Affecting the Healthfulness fo Dwellings" (1878), "The Study of Iron and Steel" (1884), "Causes of Industrial Depression" (1884), "Industrial Competition" (1885), "Iron Manufacture in the Southern States" (1885), "The Engineer and the Wage-Earner" (1885), "Professional Ethics" (1886), and "The Shop Council" (1886). He was awarded an honorary Ph.D. by Rutgers College in 1890.