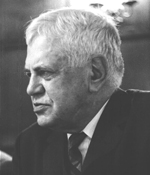 Herbert G. Moulton was born in the little mining town of Bellevue , Idaho , January 16 , 1883 . He grew up in Baker , Oregon, and attended the University of Oregon, receiving a degree of B. S. in Mining Engineering in 1905. Between his sophomore and junior years at college, he worked as a mine surveyor, chief chemist, and assayer. After finishing college, he was engaged in mining and railroad work in Oregon , California, Nevada, New Mexico, and Ontario. In 1908 and 1909 , work on mine examinations in Utah and Arizona brought him in contact with Eugene Meyer, Jr. & Company, for which organization he became consulting engineer in 1909.

In his capacity as consultant to financial interests during the past thirty years, Mr. Moulton has examined and reported on many types of mining properties, including metal, coal, petroleum, and even nonmetallics. He is widely known as a valuation expert on railroads . During the World War he served on the War Industries Board with Bernard Boruch, and later became Chief Examiner for the War Finance Corporation. In 1932 , he acted as Special Adviser to the Reconstruction Finance Corporation. As a consultant for the Public Service Commission in New York in connection with mining methods in subway construction, he developed some new ideas on “Earth and Rock Pressures,” which were embodied in a paper presented before the American Institute of Mining and Metallurgical Engineers and published in its transactions.

Mr. Moulton's mining activities in recent years have been largely in the copper field. In that connection, his appreciation of the two fundamental factors of success for profitable investment in mining properties - large ore reserves and sound management - is amply borne out in a paper entitled "Twenty-one Years of Copper Convertibles," which he wrote in 1929.