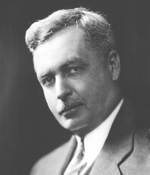 Chester Alan Fulton, President of the Southern Phosphate Corporation, of Baltimore, Maryland, was born in Brooklyn, N. Y., December, 1883. He is the son of Charles A. and Anne McG. Fulton. He received a degree of E. M. from Columbia University in 1906 and is a Theta Delta Chi. In 1909, he was married to Ethel B. Pagan and they have two children, John C. and Bette.

Mr. Fulton’s career began in 1906 as assayer for the Standard Smelting Co. at Rapid City, S. D.; in 1907, he became Shift Boss for the Cyanide Plant of the Peregrine M. & M. Co., in Guanajuato, Mexico; 1908-12, Mine Superintendent of the same company. In 1912-14, he did professional work in Mexico, Central America, and the U.S.A. Then followed two years as Superintendent for the Lo. Increible Mine, Venezuela. He returned to professional work in Cuba for a few years and following that became Manager for the Davison Sulphur Co., in Cuba. For seven years, 1921 to 1928, he was Consulting Engineer for the Davison Chemical Co. in Baltimore and from 1928 he has been Vice President, Director and President of the Southern Phosphate Corporation and Davison Chemical Corporation. He is a member of the Council of the Phosphate Export Association, the American Institute of Mining and Metallurgical Engineers and is a past Chairman of the Industrial Minerals Division and a Director of the latter society. He is also a member of the following clubs: Baltimore Country, Gibson Island, Merchants, Chesapeake in Baltimore, Columbia University and Mining Clubs in New York City.