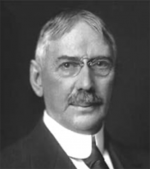 Charles Frederic Rand, son of Frank C. and Adeline (Smith) Rand, was born on the 7th of August, 1856 in Canaan, Maine. On October 21, 1885 he married Mary Burnham (d.1916), in Milwaukee, Wisconsin, and they had four children. Rand was the financial officer of a railway corporation in Milwaukee and was later engaged in mining iron ore in the Lake Superior region and in Cuba. After 1893 he was prominently identified with the development of the Island of Cuba, particularly in the construction of railroads and development of iron mines. He held the position of President of Ponupo Manganese Mines, Antimony Co., Hubbard Process Corporation. He held the positions of President and Director of AIME (1913), and Chairman of the United Engineering Society. He was a member of the American Iron and Steel Institute of Great Britain. In 1913, Rand was decorated by His Majesty Alfonso XIII, King of Spain, with the Grand Cross of Knight Commander of the Order of Isabella Catolica, and the Croix de Chevalier de la Legion d’Honneur [Chevalier (Knight) Cross of the Legion of Honor of France in 1922. Rand participated in the following clubs; Engineers (vice-president), Down Town Association, Automobile of America, Metropolitan, Union League, Groilier, Rocky Mountain (New York), Essex County Country (Orange), Milwaukee (Milwaukee), Republican, Unitarian.