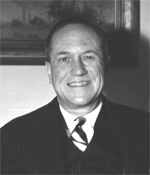 Andrew Fletcher was graduated from Sheffield Scientific School, Yale University, in 1916. In 1949 he received an honorary degree in Engineering from the University of Missouri; in 1953, the honorary degree of Doctor of Laws from St. Francis Xavier University in Nova Scotia. After his graduation from Yale in 1916, he worked as a mechanic in the Harlan & Hollingsworth shipyard at Wilmington, Del., and the following year became foreman for the Baltimore Dry Dock Company. In 1918, he became Secretary of theW. & A. Fletcher Co., Hoboken, N.J., and, from 1924, he was in direct charge of the business until the shipyard was sold in 1929. He then gave up his connection with shipbuilding to become Vice-President and Treasurer of the St. Joseph Lead Co., of which he has been President since 1947.

Mr. Fletcher is Chairman of the Industrial Hygiene Foundation of America, Vice-President and Treasurer of the American Mining Congress, and President of Lead Industries Assn. He is serving as Director and Trustee of many organizations, including Mine La Motte Corp., Bonne Terre Farming and Cattle Co., and Missouri-Illinois Railroad Co.

Mr. Fletcher served most ably as President of AIME, of which he has been a Member since 1936. He has also served as Treasurer and Director.